Hot on the heels of the high profile Colin the Caterpillar litigation, which has attracted significant media attention, in another lookalike case the Scottish Court of Session has ordered Lidl to temporarily stop selling its Hendrick’s lookalike gin.

The decision concerned Lidl’s own-brand “Hampstead Gin” (pictured below).  Hampstead Gin had been sold by Lidl for around ten years, but in 2020 Lidl redesigned the Hampstead bottle and label. Owners of the Hendrick’s gin brand, William Grant and Sons Irish Brands Ltd (“Hendrick’s”/”the claimants”), alleged that the redesigned Hampstead Gin infringed its registered trade mark protecting the Hendrick’s bottle and diamond label design (the “Hendick’s Mark”) (pictured below) and amounted to unlawful passing off. 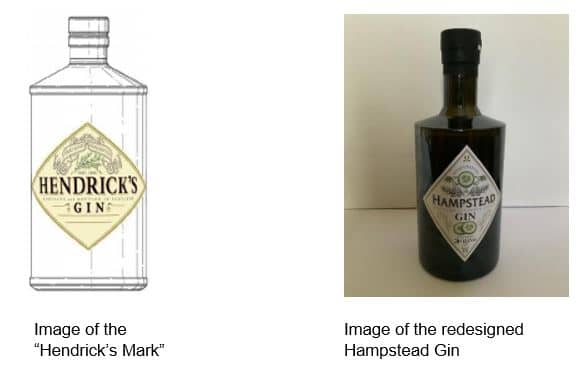 More specifically, the claimants argued that the re-designed label gave rise to a likelihood of confusion contrary to s.10(2) of the Trade Marks Act 1994. The claimants also argued that Lidl’s Hampstead Gin  took unfair advantage of, and diluted, the distinctive character and reputation of the Hendrick’s Mark contrary to s.10(3) of the 1994 Act. Hendrick’s therefore sought an interim interdict (equivalent to an interim injunction in English proceedings) to restrict Lidl from selling the redesigned version of its Hampstead Gin.

As the case concerned an application for interim relief Hendrick’s only needed to demonstrate a case to answer and that the balance of convenience favoured the grant of interim relief.

Despite acknowledging a degree of dissimilarity between the Hendricks’s Mark and appearance of the redesigned Hampstead Gin, Lord Clark found sufficient basis to argue visual and conceptual similarity between the mark and the redesigned Hampstead Gin. However, on the issue of confusion, Lord Clark held that on the information before him there was no reasonable prospect of Hendrick’s establishing a likelihood of confusion or association with the Hendrick’s Mark. For similar reasons, Lord Clark decided there was no reasonable prospect of Hendrick’s meeting the test for a misrepresentation required for passing off.

Even though the decision of Lord Clark did not involve a full consideration of the merits, the outcome serves to illustrate how unfair advantage claims can be used as a weapon to combat lookalike products and obtain interim relief. Moreover, only a few months after the infamous Colin the Caterpillar litigation generated significant media attention and highlighted the prevalence of social media in brands disputes, this decision also illustrates the weight of social media as evidence of consumer perception in brands disputes.

Hendrick’s appeared to place considerable reliance on social media posts as allegedly indicative of the views of the public and indeed the average consumer and the social media content featured heavily in the judge’s findings and conclusions. Even though Lord Clark held that the social media posts did not support Hendrick’s case on confusion and passing off, he did accept that the posts supported Hendrick’s allegation that Lidl intended to ride on the coattails of the reputation of the Hendricks Mark and that the redesigned Hampstead Gin could influence the economic behaviour of consumers.

Hendrick’s will be encouraged by this early victory, but it remains to be seen how the case will develop and if the same conclusions are reached at trial.