PlanetArt, which operates the popular FreePrints app, has succeeded in a trade mark infringement claim against its competitor Photobox. The claim related to an app which Photobox launched last year to provide prints of photos for free.

The judgment, of Daniel Alexander QC sitting as a Deputy High Court judge, shows the fine margins and nuances at play in trade mark law where a claimant alleges that it has acquired rights in a phrase which is inherently descriptive of the nature of its business, in this case ‘FreePrints’.

The claimant’s FreePrints app was launched in 2014. It has been consistently popular in the Apple and Google app stores. Once the app is downloaded, it enables customers to order free prints of their photos. The prints are then delivered to the customer, with the customer only paying delivery charges. In other words, the FreePrints app provides free prints.

By the end of 2019 the app had been downloaded over 11 million times in the UK and had generated substantial revenue. It was also advertised extensively. The evidence showed its marketing since 2014 had generated over 3 billion impressions in the UK.

Importantly, the judge found that PlanetArt had taken extensive steps to present and project the composite word ‘FreePrints’ as its brand, and that customers and competitors had come to treat it as such.

The defendant, Photobox, is also a successful photo printing company. However, its business model had been largely focused on a pay-per-photo model. This began to suffer from the availability of free alternatives, such as FreePrints.

Photobox therefore decided to launch a new app to compete directly with FreePrints. It launched its app in April 2019 and later that month PlanetArt issued these proceedings.

By the time the case came to trial, PlanetArt’s primary claim was for trade mark infringement under sections 10(2) and 10(3) of the Trade Marks Act 1994. It relied on the registered trade mark shown below. The mark was applied for the day before PlanetArt sent a letter before action to Photobox. The trade mark entered the UK register in August 2019. 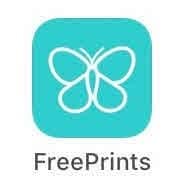 PlanetArt complained of three signs which were used by Photobox. We’ll consider each of these in turn below, as the judge reached different conclusions for each sign.

The first use complained of was of Photobox’s Free Prints icon, as shown below (along with a Christmas version on the right):

This is the icon which would appear on the customer’s phone after they had downloaded the app from the Apple or Google app store.

The judge found that this icon infringed PlanetArt’s trade mark. He first found that there were significant similarities in the aural and visual elements of the sign and some (more limited) conceptual similarities. The Photobox icon was a similar turquoise colour to PlanetArt’s, also featured a simple white line drawing, and beneath the icon were the words ‘Free Prints’.

What appears to have been critical to the judge’s finding is that Photobox had opted to use just the words ‘Free Prints’ beneath the icon, rather than any words which might indicate that the app originated from Photobox. The judge noted that apps of this kind invariably used the words beneath the logo to show their brand name, rather than a description of the app or the service provided.

This is clearly shown by an annex to the judgment, which shows the two parties’ Free Prints icons alongside the icons of other photo-related apps. 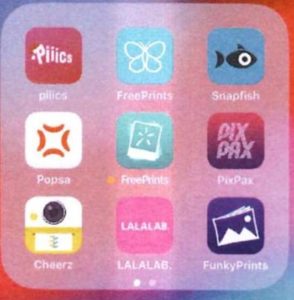 Whilst the judge expressed some sympathy that there is a limit on the number of characters which an app developer can use beneath the icon, he also noted that it was not clear from the evidence why the full name ‘Photobox Free Prints’ was not used, since this is within the 30-character limit set by the app store.

The choice made by Photobox in this regard, combined with the use of a turquoise background with a white line drawing as the logo, was sufficient to cause the judge to find infringement of PlanetArt’s trade mark under both s.10(2) and s.10(3).

The judge reached a different conclusion in relation to two different signs which were presented by Photobox at different stages of the customer journey.

The first sign shown below is the image which appears when a user encounters the app in an app store. The second image is a sign used by Photobox at other times, such as in email communications to its existing customers. 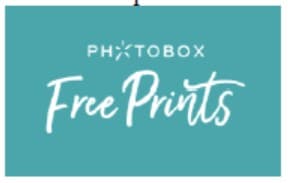 The judge found that the above signs did not infringe PlanetArt’s trade mark.

This was primarily because both signs contain the word ‘PHOTOBOX’ “prominently and in a position and manner where ordinarily consumers would expect a brand to be found.”

The judge therefore rejected PlanetArt’s argument that consumers would instead see both the ‘Photobox’ and ‘Free Prints’ elements as being origin denoting.

The result may well have been different if the FreePrints brand was not one which was inherently a descriptive term. By way of example, had the claimant’s app been known as ‘PlanetArt’ then the use of the sign ‘Photobox PlanetArt’ in the ways shown above would almost certainly have been found to infringe, following the line of authorities which flow from the CJEU’s decision in Medion AG v Thomson, in relation to the sign THOMSON LIFE. This shows one of the downsides of choosing a descriptive term as your brand.

PlanetArt also alleged that each the signs used by Photobox amounted to passing off.

Whilst the judge was persuaded that PlanetArt had some goodwill in ‘FreePrints’, and that the term had acquired a secondary meaning in that it had come to distinguish the claimant, he was not persuaded that Photobox’s signs amounted to a misrepresentation.

He reached that conclusion for two main reasons. First, in relation to the icon which was found to infringe PlanetArt’s trade mark, the judge noted that this icon only appears on the user’s screen after it has been downloaded. In reaching this finding, the judge stressed the broader context of the use which can be taken into account in a passing off claim compared to a trade mark claim.

The second major reason for finding no passing off was the absence of any evidence of actual confusion, despite there being ample opportunity for it to arise. Again, it’s interesting that the judge reached a different conclusion on passing off than trade mark infringement, when it is often the case that one result follows the other.

Whilst PlanetArt largely emerges from this case as the winner, the judge stresses in his interesting and unusual concluding remarks on the future conduct of the claim that they “cannot and should not attempt to prevent genuinely descriptive use of the term “FREE PRINTS” in respect of a business or app offering free prints …. and must give other traders, including the Defendants, broad latitude in how that is communicated.”

This is a useful warning and reminder of the limits which companies face when they adopt a descriptive term as their brand.

As for Photobox – it will be relieved, in many respects, that PlanetArt succeeded on quite a narrow basis. In particular, the judge’s findings mean that relatively small changes are needed to its icon to ensure that it does not infringe PlanetArt’s rights. We would expect that inserting its house mark Photobox into the name of the icon should be sufficient and should not prove too difficult. It remains to be seen whether or not Photobox chooses to make any further changes to the colour and design of its icon, given the judge’s pointed comments about its “antisocial non-distancing” from FreePrints’ identity.