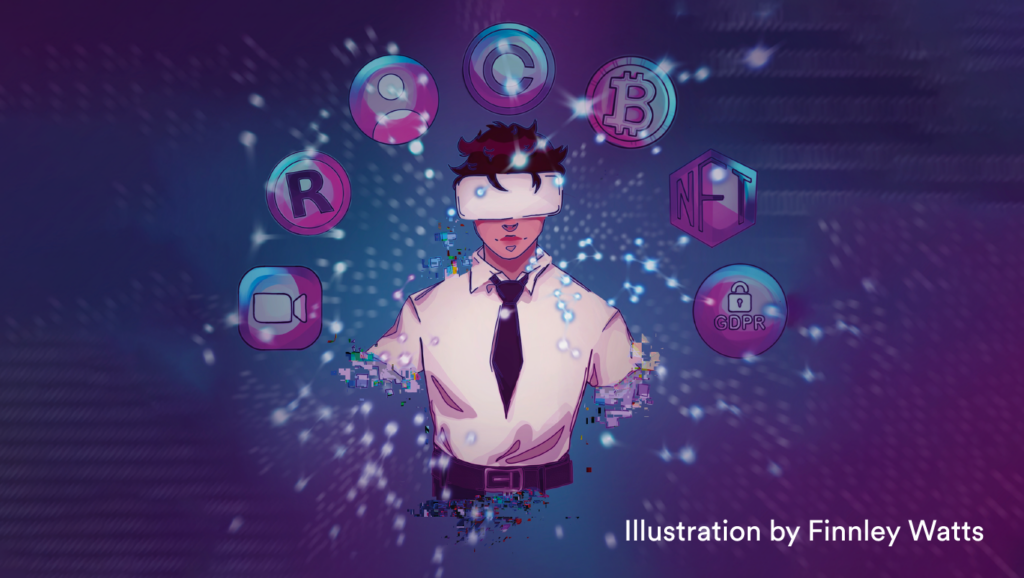 This is the first in a series of articles in which we’re going to take a deep-dive into the metaverse.

The goal of the series is not only to explain what the/a metaverse is but also to look at how existing laws and regulations may apply to it.

The first two articles aim to answer the question, what is the metaverse? This first article provides a high-level overview and focuses on jargon-busting, so if you’re already familiar with the terminology and emerging technologies which underpin the metaverse, you’re welcome to skip on to part two which provides more detail on what the metaverse currently looks like and what the future might hold.

Over the past few years the concept of the “metaverse” has increasingly pervaded the public consciousness, primarily thanks to the rebrand to “Meta” by the company formerly-known as Facebook, and films such as Ready Player One and Free Guy. The concept of the metaverse was first popularised in the 1992 novel Snow Crash by Neal Stephenson. It envisages a persistent digital world in which users can live, socialise, work and play, own property, create and transfer digital assets, trade in currencies which exist within its framework, and even attend meetings and events.

In some iterations, the metaverse is viewed as being an entirely separate virtual reality world requiring the use of VR headsets and interactive body suits; in others, it is an augmented reality that brings the internet and digital life into the real world. However, many gamers would likely roll their eyes at the newfound popularity of the metaverse and argue that they spend a significant proportion of their time “there” already – meeting up with friends in-game online and attending (genuinely good) concerts in virtual worlds, such as in Epic Games’ Fortnite.

It’s fair to say that there is currently no definitive vision of what the metaverse will or could be, but many companies, including Meta, Microsoft and Epic Games, are gambling on its success and investing heavily in it becoming the next iteration of the internet. Before we take a look at what the metaverse currently is and could be in part two of this series, let’s first consider some of the tech jargon that underpins the metaverse and which is likely to crop up over the course of the series.

In popular culture, web3 has become a catch-all for any of the new-wave, emerging digital concepts relating to blockchain and crypto (see further below). However, the strongest advocates of web3 focus on decentralisation of the internet. Breaking free of the constraints of the current systems that underpin finance, societal structures, and capitalism itself. In straightforward terms though, web3 or Web 3.0 is meant to reflect an evolution to a newer version, the third generation, of the internet.

A blockchain is a shared database or ledger held across a network, in which data can be stored in structures (“blocks”). There is a limitation on the storage capacity of each block, and when one block is filled to capacity it is closed and linked to the former previously-filled block (adding to the “chain”). This continues as more data is added and more blocks linked. Each block is timestamped and becomes immutable, i.e. the data entered is, at that point, irreversible and permanently recorded. Each node of the network, on which a blockchain exists, holds a precise replica of the entire database or ledger. Each node or member of the network is required to independently verify of all of the transactions and data points on the blockchain, such that if someone attempts to tamper with or delete an entry in one copy of the database on one node, all of the other nodes will not reflect the change and reject it. Essentially, blockchain is a form of shared database, which allows for data to be stored and recorded in a way that is decentralised, permanent and secure.

Cryptocurrencies are encrypted data strings that represent a unit of currency in digital form. They act as an alternative to “real” currency (often referred to as fiat money) but do not rely on central authorities such as banks or governments. Blockchain technology underlies modern cryptocurrencies, such as Bitcoin. Proof of ownership and each transaction is recorded, permanently, on a blockchain.

In publishing a research paper introducing Bitcoin, its creator, who goes by the pseudonym Satoshi Nakamoto, referred to it as “a new electronic cash system that’s fully peer-to-peer, with no trusted third party”.

A smart contract is a computer code that can be built into a blockchain to facilitate, verify, or negotiate an agreement between parties. Users agree to a set of conditions and when those conditions are fulfilled, the terms of the agreement are automatically carried out by the computer program, the blockchain is then updated accordingly and the agreement becomes immutable. One of the key advantages of a smart contract is that they can execute an agreement immediately without the need for intermediaries to execute the transaction.

NFTs… the buzzword of 2021. Aren’t they just expensive cartoon animals?

“non-fungible” means unique. For example, a ten-pound note is fungible – it can be traded with another ten-pound note and you still have ten pounds. Non-fungible items are unique and cannot be traded in the same way. Original artworks, limited edition trading cards, and private property are all non-fungible. Just as lottery tickets or shares in a company are tokens that represent something else (whether entry to a lottery or ownership of a company), an NFT is a token that represents a record of ownership of a unique digital asset, such as a jpeg or gif image, or an audio or video file. An NFT can be thought of as a digital certificate of authenticity. Stored and authenticated on a blockchain they are virtually impossible to tamper with because each of the nodes in the blockchain retains a complete copy of the ledger, confirming ownership.

Artificial intelligence is the utilisation of computers and datasets to enable problem solving. It is often thought of in conjunction with machine learning, where computers read data fed to it, learn from the patterns, and so become more efficient at solving those problems.

XR is an umbrella term for any technology that alters reality, either by adding digital elements to the real world or by creating an entirely new virtual world. It includes augmented reality (“AR”), mixed reality (“MR”) and virtual reality (“VR”):

So… what has this all got to do with the metaverse?

For the metaverse to become a reality it may require web3-type technology and for it to become truly ubiquitous, analogous to the internet in 3D, it may be necessary for it to be built on a decentralised (possibly blockchain) platform. Many of the problems that arise in relation to the metaverse might be solved by web3 solutions:

These issues will be considered in detail in this articles series. While web3 concepts won’t always be the solution, they are currently being touted as the forerunners and are discussed throughout this series.