On 21 December 2017, Judge Selna of the US District Court for the Central District of California released a judgment which is likely to be the most significant US FRAND decision yet. In a case brought to end the global dispute between two giants, TCL (the seventh largest manufacturer of mobile phones worldwide) and Ericsson (holder of one of the largest mobile telecommunications SEP portfolios), Judge Selna set a FRAND royalty rate for Ericsson’s 4G, 3G and 2G patents as part of a five year global licence agreement.

The judgment is of comparable length and complexity to last year’s UK Unwired Planet decision (which we discussed here and here). The approach taken by Judge Selna shares a number of similarities with that of Birss J in Unwired Planet, making use of a top-down methodology and comparable licences. However there are also a number of key differences that, if applied in future judgments, could have a significant impact on how FRAND rates are calculated.

Key differences at a glance

Due to the wealth of detail contained in the TCL judgment, we have picked out just a few key points in this article. For a more detailed analysis, we recommend a post by Professor Contreras (here).

Ericsson’s offers: Judge Selna concluded that Ericsson’s offers were not FRAND, but that (as in Unwired Planet) offering a rate higher than that ultimately determined as FRAND was not a breach of FRAND obligations. Interestingly, Judge Selna also explicitly stated that royalty floors proposed in Ericsson’s offers, aimed at ensuring minimum levels of revenue despite the low prices of TCL’s products, were discriminatory and non-compliant with FRAND.

Top-down Approach: Both judgments made use of a top-down analysis, but in slightly different ways. In TCL, the focus was on the aggregate royalty burden, established by reference to statements about aggregate rates made by Ericsson and a number of other significant IP holders at around the time the standard was adopted. Whereas Birss J considered such statements to be unenforceable statements of intent, Judge Selna noted the role that they played in ensuring adoption of a particular standard (resulting in global use of LTE rather than WiMax for example), and considered it appropriate to tie the aggregate royalty rate for the standard to those rates.

Having determined the industry total number of essential patents (a considerably lower number than the total number of declared patents, due to the problem of over-declaration, also considered in detail in Unwired Planet), the Judge then established Ericsson’s share of the total royalty rate.  This was cross-checked with an analysis of comparable licences to ensure a FRAND rate – in principle this was particularly important for 4G, where the ex ante statements pointed to a range of aggregate royalty rates (of between 6 and 10%) – but in practice, it was the 3G top down rate which was adjusted as a result of the comparator licences review. In Unwired Planet the opposite approach was taken, determining a rate using comparable licences, and cross-checking against the implied aggregate royalty.

Expired Patents: When determining Ericsson’s share of the relevant standards, any of its patents which had expired prior to the date of closing arguments were excluded from its share. However, expired patents were left in the number of total SEPs used as the denominator. The judge argued that removing them would unfairly reward those patentees who still had patents remaining in the standard rather than the public.  While the exclusion of such patents was in part motivated by specific considerations of US law (the prohibition on paying royalties on expired rights), there also appears to be a sound economic basis for ensuring that patentees holding later-expiring patents are not over-rewarded for their rights. This is also arguably in line with the recent Commission Communication on SEPs (discussed here) which suggests that the value of technologies declines over time.

Non-Discrimination: In assessing the non-discrimination aspect of FRAND, both judges agreed that licensors cannot discriminate against similarly situated licensees. Judge Selna looked in some detail at what ‘similarly situated’ means and concluded that the basis for comparison must be all firms reasonably well-established in the world market. This excludes ‘local kings’ – firms that sell most of their products in a single country – but includes industry giants such as Samsung and Apple, despite their greater market share and brand recognition. This approach is good news for licensees whose products retail at lower price points, as it means they should benefit from the same level of rates they do.  Judge Selna explicitly dismissed the relevance of competition law (in this case the US Sherman Act) for this assessment – whereas Birss J. applied Article 102 in determining that – if his primary conclusion about benchmark rates was incorrect – Huawei would still need to show harm to competition resulting from any discrimination between it and other similarly situated licensees. (Coincidentally, the same approach to discrimination has recently been endorsed in the IP – albeit not the SEP – context by Advocate General Wahl in Case C-525/16 MEO – Comunicaçoes e Multimédia.)

Multi-mode: The issue of multimode devices was dealt with differently in the two cases. In Unwired Planet, Birss J computed separate multimode rates based on a set of ratios. In TCL, it was implicit that the rates were single mode, but they appear to apply to multimode products.  Notably, the top-down figures established by the Judge were held to be implicitly multimode rates.

Geographical Regions: Judge Selna considered Ericsson’s patent portfolio strongest in the USA, so applied a discounted rate elsewhere. He divided the world into three regions – USA, Europe and the Rest of the World and established a precise discount rate for each region and each standard. This was clearly a fact-specific exercise, and would depend on the particular; while the Judge indicated that it could have been helpful to break the regions down further, he also noted that any royalty regime should be reasonably straightforward.

Compare this to Birss J in Unwired Planet where the world was divided into only two regions – major markets (for countries where Unwired Planet held 3 or more patents) and other markets.  One striking similarity between the two judgments was that both treated China (where the licensees in each case manufactured their products) as a floor for global royalties, allowing the licensors to claim rates on all global sales, even if there is no local patent protection.  In the case of the TCL judgment, this meant that for 3G, Ericsson’s lower patent holdings in Europe compared to China led to the Rest of World rate applying in Europe as well.

FRAND Rates: The aggregate patent numbers and final rates as determined in both cases are set out below: 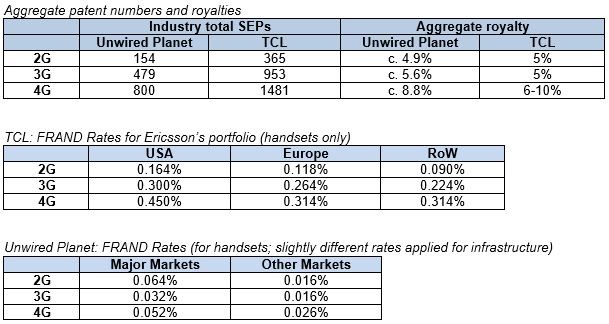 It’s worth noting that once Unwired Planet’s and Ericsson’s respective shares of the total relevant SEPs are taken into account, the rates inTCL are more favourable to the licensee than those in Unwired Planet. The comparison between the cases is all the more interesting, given the provenance of the Unwired Planet portfolio which was drawn from Ericsson’s.  In Birss J’s judgment, the Unwired Planet portfolio was considered to be representative of a subset of Ericsson’s, while Ericsson’s 4G benchmark royalty rate was held to be 0.80%.  Given that Judge Selna calculated total industry patent numbers of close to double those found by Birss J, the fact that the Ericsson per patent rate in TCL was almost half that found in Unwired Planet is mathematically unsurprising, and points to considerable convergence on other parts of the analysis.

While the TCL judgment may be welcomed by implementers, an appeal is to be expected.  Meanwhile the appeal in Unwired Planet is due to come before the English Court of Appeal in May 2018, so there is no doubt there will be further developments in this field in the near future. Whether the outcomes of those appeals will further align both sides of the Atlantic or draw them further apart is something that we will have to wait to find out.