In a recent UK High Court decision Charlotte Tilbury was able to claim artistic copyright in two designs subsisting in its Starlight Palette make-up palette and successfully prove infringement by Aldi and its lookalike palette. In a rare move for infringements of this nature, the court gave summary judgment on the view that Aldi had no real prospect of successfully defending the claim.  Given that passing off has many limitations in dealing with copy-cat products, this case might give some impetus for rights holders to assess what copyright rights they might be able to assert against copy-cat products in the right circumstances.

The claimant, Islestarr Holdings Ltd (‘Islestarr’), launched the Charlotte Tilbury make-up brand in 2013 with designs developed in collaboration with a third party design agency, Made Thought.  The designs developed with Made Thought included two designs in the ‘Filmstar Palette’; first the ‘Starburst Design’ embossed onto the lid of the palette and second the ‘Powder Design’ embossed into the make-up patches of the palette (together the “Tilbury Designs”).  The ‘Filmstar Palette’ retailed for £49 and generated £12.7 million in revenue in the last five and a half years. Aldi also produced two make-up powder palettes which originally retailed online for £6.99 before being reduced to £4.99. Aldi sold around 20,250 units generating approximately £140,000 in revenue. 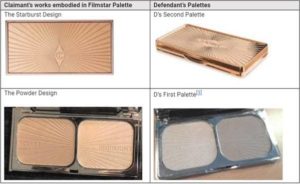 Islestarr argued that Aldi had deliberately developed a “cheap lookalike product” to ride on the success of the Filmstar Palette and that the products sold by Aldi incorporated features from their Starburst and Powder Designs which amounted to copyright infringement.

The application for summary judgment on copyright infringement gave rise to the following issues:

Despite inconsistencies in the design story, issues over employment status and the need for multiple assignments, Deputy Master Linwood found in favour of Islestarr on the issue of ownership, concluding that title in the Starburst and Powder Designs had been validly assigned from Made Thought. Nevertheless, the factual scenario in this decision highlights the importance of establishing title and the practical difficulties that can arise in collaborative design projects and incremental product design involving multiple parties. Claimants should be astute to ensure that agreements with third party designers and design agencies make provision for the ownership of copyright (and other intellectual property rights) to avoid dispute.

Fixation of the Powder Design

Before going on to consider subsistence and infringement, Deputy Master Linwood addressed Aldi’s argument that copyright could not subsist in the Powder Design due to the ephemeral nature of the powder. In support of that argument reliance was placed on the Harpbond[1] decision which held that the facial make-up of Adam Ant was not protectable because it was not fixed on a tangible medium.

Whilst Depute Master Linwood accepted the ephemeral nature of the Powder Design, he “had no doubt” that, in principle, the Powder Design was capable of attracting artistic copyright.  Rather than relying on Harpbond, Deputy Master Linwood favoured the approach of HHJ Birss in Thornber[2] which emphasised the content of artistic works over the medium through which the work is recorded. According to Deputy Master Linwood “the powders are a three-dimensional reproduction of the two-dimensional object, namely the drawing” and the fact that the design could disappear by being rubbed off by a user did not prevent the designs attracting copyright protection.

Having dealt with fixation, Deputy Master Linwood turned his attention to subsistence and originality. In setting out the law on originality Deputy Master referred to Infopaq and also cited numerous passages from the decision of Mummery LJ in Sawkins v Hyperion most notably that:

“a work need only be ‘original’ in the limited sense that the author originated it by his efforts rather than slavishly copying it from the work produced by the efforts of another person.”

In evidence Islestarr accepted that the Sunburst and Powder Designs drew on art deco inspiration and each design had discrete features common to the art deco style.  Even so, Deputy Master Linwood, relying on Sawkins, concluded that, when viewed in the round, the Sunburst and Powder Designs were original as the designs involved some independent choice and had not been slavishly copied from any of the 26 prior designs that had been adduced by Aldi.

When assessing infringement, the Deputy Master followed the tried and tested approach established in the Designers Guild decision.  Having set out the similarities and differences between the products, the judge rightly gave greater weight to the similarities and concluded that they were substantial in quantitative and qualitative terms.

As Aldi had had prior access to the designs, the burden of proof shifted to Aldi to disprove the similarities resulted from copying. Aldi sought to rely on the difference between its palettes and the Tilbury Designs, but that approach was rejected by Deputy Master Linwood as a misapplication of the approach in Designers Guild.   As such the Deputy Master concluded that the similarities amounted to a substantial part of the Sunburst and Powder designs and Aldi had no realistic prospect of defending the infringement claim.

The conclusions of Deputy Master Linwood on subsistence and infringement are not surprising, particularly on infringement when one looks at the products side-by-side.  Notwithstanding the evidential difficulties encountered and the inconsistent design story put forward by the claimants in this case, the recognition of copyright subsistence in the designs and the finding of infringement highlight the fact that copyright protection can be a useful weapon for brand owners in the fight against lookalike products.  The decision is also a warning sign to discount retailers selling lookalike products as it highlights that in a case of copyright infringement it is not enough to point to differences in product design to avoid infringement.

Deputy Master Linwood’s analysis on fixation also emphasises that, unlike for literary, dramatic and musical works, the fixation requirement for artistic works does not necessitate permanence.  The decision shows that with artistic copyright the emphasis is on the content conveyed by the work as opposed to the medium on which it is fixed.  Provided the design of the artistic work is recorded in some form, the physical manifestation of the design will, in principle, be entitled to artistic copyright regardless of its permanence.  In the Islestarr decision it was relatively straightforward to establish fixation from earlier design drawings, however it remains to be seen if it will be as straightforward to establish fixation in future cases where the artistic work has not clearly been captured in this way.

The use of a summary judgment application for this type of case is a bullish step and is not always suitable for all copy-cat cases.  All too often the facts of ownership or subsistence are not easily discernible and are prone to allowing arguable defences to be made to justify proceeding to trial. For example, in the present case Aldi attempted to use factual and evidential inconsistencies in the chain of title as a compelling reason to proceed to trial, albeit to no avail.  Despite acknowledging inconsistencies in the claimant’s evidence, Deputy Master Linwood was content that there was no basis to dispute the claimant’s evidence and justify proceeding to trial.  Equally, the Deputy Master was comfortable granting summary judgment as he was satisfied that the issues in dispute had been fully aired and considered.  Ultimately, the claimant in this case made a bold decision to apply for summary judgment and it paid off.