What is the Job Support Scheme (“JSS”)?

JSS is a government-funded wage support scheme to help employees return to (or remain in) work part time rather than be made redundant when the Coronavirus Job Retention Scheme (“CJRS”), or “furlough scheme”, comes to an end. It aims to ease the financial burden for employers and provide employees with continued employment and some income. This echoes a similar scheme which has been introduced in Germany.

JSS will come into effect from 1 November 2020 and run for six months until the end of April 2021.

How will it work? 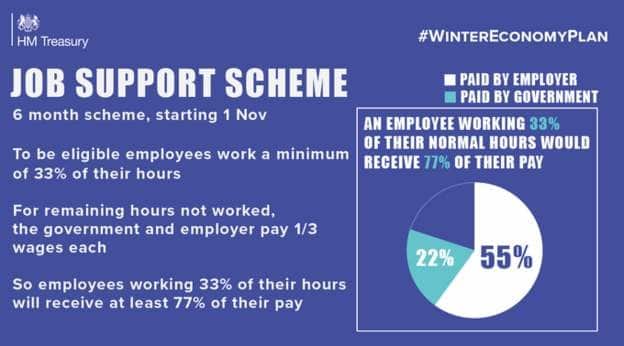 a)  What will employers receive?

b) How to make a claim

Employers will first have to pay employees who are working under JSS all the wages that they are owed, including the government’s contribution. The employer will then have to make a claim for the government to reimburse them for their part of the employee’s wages.

Claims will need to be made in respect of a given pay period, after payment to the employee has been made and that payment has been reported to HMRC via an RTI return.

JSS will open on 1 November, and employers will be able to make claims under the scheme from 1 December through Gov.uk.

Who will be eligible?

JSS will be open to all employers with a UK bank account and UK PAYE scheme. Small and medium-sized enterprises will not have to meet any kind of financial assessment, but large businesses will only be able to access the scheme if they can demonstrate that turnover has fallen as a result of the pandemic. The Treasury expects that large employers using JSS will not make any capital distributions while accessing the grant.

Whether or not an employer has previously made use of the CJRS will have no effect on whether they can access JSS. Employers will also be allowed to claim the previously introduced Job Retention Bonus alongside accessing JSS.

As well as working at least one-third of their usual hours, an employee must have been on the employer’s PAYE payroll on or before 23 September 2020 to benefit from JSS.

Employees will be able to cycle on and off the scheme and need not work the same pattern of hours every month. However, each period in which they are on the scheme must last at least seven days.

While on the scheme, the employee cannot be put on notice of redundancy or made redundant.

The end of employment law as we know it?

Court of Appeal examines clause 6.1 of the ETSI IPR Policy