The CLIP Board is delighted to welcome its first guest blog post, which has been kindly written by Dr Avantika Chowdhury of Oxera. Avantika brings a much-needed economics perspective to the vexed question of MFN clauses. For those who would like to read more on this subject, Oxera has also recently published an article on the topic in its regular Agenda series.

The use of ‘most-favoured-nation’ (MFN) clauses in e-commerce has recently become a closely debated topic in the antitrust world and is causing competition authorities some headaches.

For those not too close to the developments, several national competition authorities (NCAs) across Europe have recently been grappling with competition issues in a variety of online markets including online hotel bookings, books, motor insurance and sports good retail. Among these, the hotels and books cases have been creating the most waves so far. Both cases involve MFN clauses, which are essentially agreements between a supplier (e.g. a hotel) and a specific distributor/retailer (e.g. a travel agency) stipulating that the supplier will offer the best available terms to the distributor/retailer. The scope of ‘best available terms’ does vary. For example, an MFN may require the supplier to offer the best available terms among those offered to all other sales channels (a ‘broad’ MFN), or it might require that the terms are best among those offered to specific sales channels or available through the supplier’s own distribution channel (a ‘narrow’ MFN). Although MFNs are not considered anti-competitive per se and in some circumstances will even have efficiency benefits, the authorities are concerned that certain types of MFNs may restrict competition among sellers and/or distributors/retailers. Broadly speaking, the potential concerns are the following.

There is also a concern that MFNs or similar parity provisions can be used as a tool to implement collusive behaviour, especially in online markets where monitoring of rivals is easier.

In the online hotel booking cases, the focus thus far has been on the potential restriction of downstream competition. More than 10 NCAs have been investigating agreements between hotels and online travel agents such as Booking.com and Expedia, which potentially prevent/restrict price competition. Interestingly, although the key issue(s) being looked at across various jurisdictions are similar, earlier this summer the Commission expressly decided not to launch its own investigation. It remains to be seen whether this changes following recent developments (e.g. the recent success of Skyscanner in persuading the UK Competition Appeals Tribunal to quash the OFT’s decision for the UK market – see here).

The concern in the US e-books case, on the other hand, was about collusion. In this case, both the US DoJ and the European Commission investigated Apple and five publishers for price-fixing. While the Commission settled its case, the US investigation culminated in a decision which found that MFNs between Apple and each of the publishers served as a tool to implement explicit collusion that was aimed at stopping Amazon’s discounting of e-books and at increasing the prices above the ‘wretched $9.99’ price. It is notable that the MFNs, by themselves, were not found to be anticompetitive in this case (see US District Judge Cote’s opinion here, and an excellent summary here). The more recent debates about this market have Amazon under the spotlight, with calls by publishers in Germany and the UK to open a competition investigation into the market (see here).

So, how do MFNs affect competition?

The answer to this (fortunately or unfortunately) depends on a few factors, including whether the distributor is acting as an agent, whether the MFN is about wholesale terms, or retail prices, the breadth of the MFN, the position of the parties to the agreement and the extent of use of MFNs in the market more broadly.

To illustrate, I will focus below on the specific example of a retail MFN in an agency business model, i.e. where a supplier offers a product to consumers through retailers who merely act as ‘agents’ (with no involvement in price setting) and pays each agent a commission for every product it sells. For example, if a hotel H advertises a room through two online travel sites (Site 1 and Site 2), H will set the prices available through each site (in the figure, these are P1 and P2) and pay a pre-agreed commission to each (C1 and C2) based on their bookings. Suppose also that an MFN between H and Site 1 stipulates that H cannot advertise the same room for a lower price through an alternative travel site (e.g. Site 2) or even through H’s own website (i.e. it is a ‘broad’ retail-level MFN).

Example of retail MFNs in an agency model 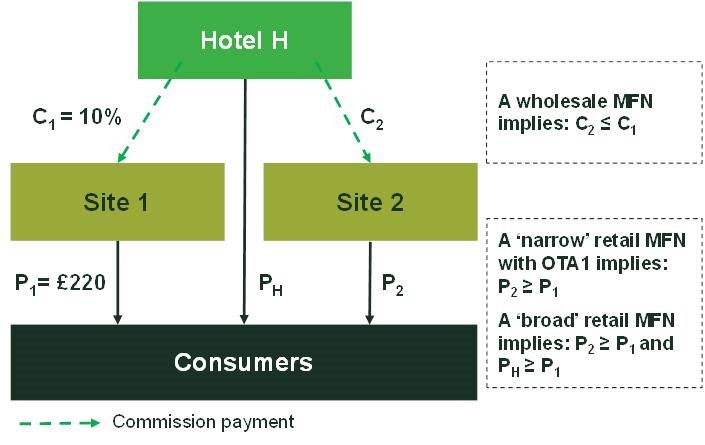 Such a broad MFN could restrict competition in a number of ways. First, it can reduce the incentive of Site 1 to compete for reduced commission rates. This is because, in the absence of the MFN, H has the incentive to ‘reward’ the site that offers the lowest commission rate by offering to advertise the lowest prices through this site to encourage sales. However, the broad MFN prevents H from ‘rewarding’ low-commission sites (e.g. Site 2) without extending the ‘reward’ to Site 1.. Hence, in presence of a sufficiently broad MFN, Site 1 will not be concerned about its competitiveness in the retail market even if it increases its commission. This in turn raises the likelihood of consumer harm, on the presumption that higher commissions ultimately feed through into higher retail prices.

MFNs can also restrict competition by undermining market entry and expansion. For example, a new travel site that wishes to offer lower commissions to H in order to be able to advertise lower prices to consumers and gain market share, will not be able to do so without facing a matching low price from Site 1. Hence low-cost/low-price entry and expansion may be foreclosed. Existing literature suggests that the larger the party (or parties) with the MFN(s) in place, the more likely the foreclosure effects. Given that innovation in e-commerce often arises from new business models, there is therefore a broader concern regarding potential dampening of innovation in e-commerce.

It is worth noting, however, that some recent academic literature (for example, see here) shows that in certain situations, retail MFNs increase incentives to enter due to the increased profits available (this occurs, for example, when commissions are based on profit sharing and when an entrant’s business model is similar to the incumbent’s). It is also notable that there has been little assessment of the actual benefits of MFNs, although that they exist is accepted by economists and authorities (see, for example, the DoJ’s workshop here). One of the key benefits of MFNs is to prevent hold-up of investments by retailers/agents, because MFNs, by preventing the supplier from offering better terms to other retailers and/or undercutting via the supplier’s own sales channels, can prevent others ‘free-riding’ on a specific retailer’s investment (think of eBay and consumers using its reviews to make an informed decision but ultimately buying through another platform or through the supplier’s own site which offers lower prices). MFN clauses can also benefit consumers directly by, for example, allowing retailers to advertise their ‘lowest price offers’, and hence reduce consumer search costs. However, the real question is whether such efficiency arguments hold in specific online markets.

All in all, lots of questions, not so many answers. The hotels investigations by the various NCAs will hopefully provide some answers quite soon. Now let’s just hope they come up with similar answers