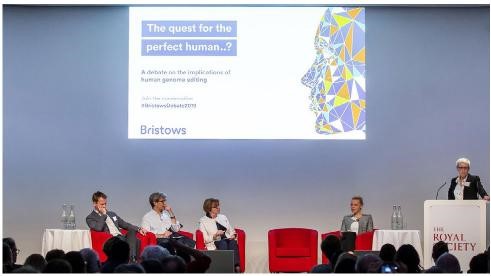 In Paris, delegates at a meeting of the Association for  Responsible Research and Innovation in Genome Editing  (ARRIGE) asked whether it was ethical not to adopt mosquito gene drives to conquer malaria, discussed public engagement, and considered the regulation of “GE” foods. Meanwhile, in London an International Commission on the Clinical Use of Human Germline Genome Editing convened by the Royal Society and US National Academies of Medicine and Sciences (NAM & NAS) heard evidence from scientists, clinicians and regulators from around the world, to help it to identify the scientific, medical, and ethical requirements to be considered when assessing clinical applications to undertake heritable human genome editing, if (and it’s a particularly big if) society concludes that human germline editing applications are acceptable. In both Paris and London, where delegates were met by protesters opposed to the creation of “designer babies”, the focus was upon the international governance of something which is prohibited almost everywhere, and barely discussed in the average kitchen: changing the germline genetic identity of human beings.

To raise the curtain on such an auspicious week, Bristows held a debate at the Royal Society featuring four eminent panellists, chaired by the distinguished broadcaster Joan Bakewell, and a hall of almost 300 guests, including the UK co-chair and members of the International Commission, members of the World Health  Organization’s expert advisory committee on the  governance and oversight of human genome editing, leading IVF experts, scientists and philosophers, representatives of patient groups, research funders, religious representatives, policy makers, life science businesses, regulators, a biohacker, an activist opponent, and senior lawyers. The event was provocatively entitled “The Quest for the Perfect Human?”.

Dr Helen O’Neill, a molecular geneticist working in the field of genome editing, opened the debate with a fresh appraisal of the superstar gene-editing tool, “CRISPR” that had triggered so much excitement and concern. Fearlessly zoning in on the technical meaning behind the famous acronym, Dr O’Neill considered how those “Clustered Regularly-Interspaced Short Palindromic Repeats” of DNA might inform debate over its use.

It certainly wasn’t new or artificial: far from being invented in 2012, CRISPR is billions of years old. Its human significance arose, first, from the realisation that those weird palindromic repeats in bacterial DNA are part of an ancient immune system that recognises, then cuts up, the DNA of viruses[1]. Second, and most decisively, was the brainwave that CRISPR could be used to seek out and slice any piece of DNA in any living organism so as to change its genome, and thus the fundamental character of cells, tissues and organisms. Third, edited DNA need not only affect one organism, but its descendants, too; indeed, entire populations. Such “germline editing” implied something especially profound to us as humans. It might soon be possible for carriers of genes for conditions such as Huntington’s disease to have healthy children using their own gametes (sperm and eggs), and for these children also to have healthy children. Dr O’Neill emphasised that the technology was by no means perfect, with problems such as “off-target” effects and, in the case of embryonic interventions, “mosaicism” (where only a proportion of the organism’s cells are edited), but advances such as “base” and “prime” editing were reducing these risks sharply.

While clinical application is certainly premature, Dr O’Neill remarked that the genomic perfection implied by the title of the debate would always be a pipe dream. Not only is DNA inherently prey to mutation[2], but genomes can be affected in other ways (IVF is a strong candidate). Returning to the question under debate, she reminded the assembly that the issue in hand primarily concerned human behaviour, not science. Passing the subject to her fellow panellists, Dr O’Neill cited the remark of a former president of the Royal Society, Sir Isaac Newton, that he could “… calculate the motion of heavenly bodies, but not the madness of people.”

The second speaker, the biologist Dr Nessa Carey, who is also author of “Hacking the Code of Life”, now turned the discussion to some of the ethical issues confronted by germline gene editing. Reflecting on the dim borderline between disease avoidance and genetic enhancement, Dr Carey challenged the idea that it is up to society to decide which conditions should or should not be treated (as distinct from the question as to whether human germline editing should be allowed at all). Should it not be the very individuals who live with particular genetic conditions who are consulted[3]?

They are the ones suffering from the hereditary disorders and seeking treatment. Dr Carey illustrated her viewpoint by giving the example of those deaf communities which consider their condition to be socially beneficial and which challenge whether being a carrier for congenital deafness is really a condition capable of being “treated” by germline genome editing or any other means. Should the views of such communities, or of society at large, prevail over those of individuals wishing to have a healthy child? A rhetorical question that often arises in discourse on germline editing is, “what right do we have to intervene in the human genome?” Dr Carey flipped it: what right do we have not to intervene? If the technology is available to treat and prevent certain heritable conditions, then why should we not improve the life quality of our future children? What ethical objection would oblige us to leave them to incur lifetimes of genetic disease that could have been prevented? Why, indeed, does society lend such a special status to our genomes when it comes to editing them, despite the fact that we regularly subject our bodies to external influences that alter our DNA?

“What right do we have to intervene in the human genome?”

The next panellist, Professor Robin Lovell-Badge, head of the Laboratory of Stem Cell Biology and Developmental Genetics at the Francis Crick Institute, turned to the issue of how human genome editing might be regulated. Professor Lovell-Badge is a member of the World  Health Organization’s expert advisory committee on the  governance and oversight of human genome editing, which is examining the scientific, ethical, social and legal challenges associated with both germline and somatic[4] genome editing, such as concerns about regulatory and governance gaps, rogue clinics exploiting those gaps (as many “stem cell clinics” still do in poorly regulated territories), and other inappropriate use. The WHO Committee aims to provide global recommendations for national consideration on the subject of appropriate governance mechanisms. One recent suggestion, which followed the He Jiankui CRISPR baby scandal that had occurred almost a year before the Bristows debate, was a call for an international moratorium on the clinical use of human germline editing, a proposal urged, among others, by Professor Lovell-Badge’s fellow WHO Committee member, the distinguished Canadian bioethicist and philosopher Professor Francoise Baylis, who was also in the hall. Professor Lovell-Badge felt that the moratorium would be ineffective: without national enforcement powers, no moratorium could prevent the kind of experiments performed by He Jiankui.

CRISPR moves quickly. A week after Bristows’ Royal Society debate, CRISPR Therapeutics, the company founded by CRISPR co-inventor, Professor Emmanuelle Charpentier and our final speaker, Dr Rodger Novak, announced highly positive interim data from the first two patients with sickle cell disease and with beta thalassemia to be treated with CRISPR-based therapies[5]. The possibility that CRISPR might cure such serious haemoglobin disorders just 7 years after Professor Charpentier’ s breakthrough paper with Professor Jennifer Doudna is truly astounding, yet it was this exact hope that had driven Dr Novak and Professor Charpentier to start their company. Dr Novak hadn’t even known what CRISPR was when Professor Charpentier called to tell him about it, but since then their company has grown astonishingly, founded on the hope that previously untreatable conditions could yield to the new method. So, does the apparent power of somatic editing mean that non-heritable editing is an “ethical alternative” to germline intervention? Dr Novak would not be drawn on this. However, he did raise the immense costs involved in developing marketable products, which spoke to issues of access and reimbursement affecting gene therapies in general. Furthermore, the quality and safety standards being developed for gene-edited medicinal products were of obvious value to those working on appropriate standards for heritable interventions.

After speeches from the podium, the Chair invited questions and submissions from the floor. These included observations by patient groups, the above-mentioned Professor Francoise Baylis, Professor Dame Kay Davies (co-chair of the International Commission), Professor David Albert Jones of the Catholic Anscombe Bioethics Centre, a self-described biohacker and an activist opposed to genetic interventions in general. Although no objections to somatic editing were raised, concerns were raised in connection with germline interventions, with one delegate calling for an international agreement to ban specified (but unidentified) edits. Two striking concerns were access and inequality. Moreover, a sense of proportion was also needed: yes, genome editing could lead to inequalities, but didn’t the world have far greater ones to deal with? The responses of the panellists were framed by the assertion, voiced by Dr Carey and Dr O’Neill, that the opinions of patients are of primary importance in the genome editing conversation.

The debate drew to a close after Sarah Norcross, Director of the Progress Education Trust, brought the panellists back to the inflammatory question that had brought them there. Could human genome editing merely be a quest for “the perfect human”? Panel members were repelled by both the scientific absurdity and political toxicity inherent in the question. Dr Carey recoiled against the very premise that humans could be perfected, identifying this with notorious historical practices exercised by those in power to privilege their own ideal of human perfection to the detriment of humans lacking it. Professor Lovell-Badge suggested that, within the existing legal framework (which forbids interventions for eugenic purposes), the power to edit genomes would give individuals more choice over who should be born, not less. Finally, Dr O’Neill emphasised that the idea was scientifically ridiculous: genomes can never be “perfect”, and people are not defined by them. Her identical twin, for example, had developed quite differently, as a lawyer. These things happen.

Bristows’ lawyers have supported innovators for over 180 years, routinely working at the point where cutting edge technologies clash with regulations blunted by age. Genome editing is one of many areas in which our lawyers have deep expertise and concern for the proper development of the law. Fostering an environment from which responsible and better-adapted regulations and governance systems may ultimately arise seems the right thing for us to do. Let the debate continue.

You can watch the full debate on our YouTube channel, Bristows’ Life Sciences Debate 2019 – The quest for the perfect human..?

——————
[1] Bacteria get infections, too. “So, naturalists observe, a flea has smaller fleas that on him prey; And these have smaller still to bite ‘em, and so proceed ad infinitum.” Jonathan Swift (1733)
[2] Life evolves by the selection of random mutations: no mutations, no evolution
[3] The following day at the meeting of the International Commission, a speaker called for a clear list of conditions
[4] i.e. non-heritable interventions aimed at the cells of a person or foetus
[5] 5 In ongoing Phase 1/2 clinical trials conducted with Vertex Pharmaceuticals Inc