We have previously reported on FRAND guidance from other jurisdictions outside of Europe, such as those published in South Korea a couple of years ago (see here), as well as on EU initiatives, such as last year’s Commission Communication (see our comments here).

Earlier this year, the Japan Patent Office (“JPO”) published a “Guide to Licensing Negotiations Involving Standard Essential Patents”, which aims to shed light on key topics concerning FRAND licensing. It provides a useful summary of licensing negotiations and royalty calculations for standard essential patents (“SEPs”), including taking into account the possible implications of the rise of the Internet of Things on future FRAND-based negotiations.

The Guide focusses on the “two aspects of FRAND”: the negotiation process itself, and the terms of the resulting licence agreement. 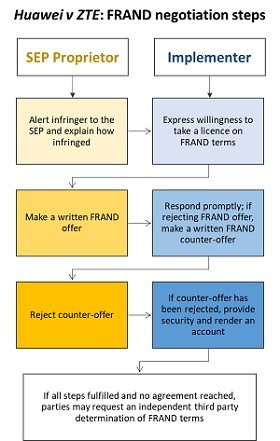 For the first aspect, it gives advice on how to negotiate in good faith, from the perspectives of both the patent holders and the implementers of patented technology. It also sets out actions that it suggests are likely to increase the efficiency of FRAND licensing negotiations, including around timing and issues such as the level of the supply chain at which negotiations should take place. Generally, the Guidelines limit themselves to outlining the issues, and are far from prescriptive. However, the footnotes provide useful examples of cases from around the world that demonstrate how courts have dealt with particular aspects of these negotiations, including Unwired Planet v Huawei ([2017] EWHC 711 (Pat)) and Huawei v ZTE (Case C-170/13 [2015] CJEU), which we have reported on previously (see, for example, here and here). Indeed, the licensing negotiation methods proposed are closely aligned to the perspective of the Court of Justice.

For the second aspect of FRAND, namely the terms of the licence, the Guide focusses predominantly on different ways of calculating a FRAND royalty, including the “top-down” and “bottom-up” approaches for calculating the royalty rate. It also sets out the advantages and disadvantages of using the smallest saleable patent practising unit compared to the entire market value as the royalty base, a subject that has sparked debate in recent years with the emergence of new technology such as smart phones and connected vehicles.

Of particular note is the fact that the JPO’s Trial and Appeal Department now provides non-binding advisory opinions in relation to the technical scope of a patented invention. Also, since April 2018 the JPO has been offering opinions to parties in disagreement over the essentiality of a patent. This appears to be in line with an increased emphasis in Japan on arbitration and alternative dispute resolution: in June 2018, it was announced that Asia’s first international arbitration centre specialising in patent disputes would be opening in Tokyo later in the year (see here).

From the European perspective, the global reach of the Japanese guide is of note: drawing on case law from around the world, it suggests that different national approaches to FRAND can be unified. For the authors, it is too soon to assume that there is a consistent global approach of FRAND. Recent announcements from US policy-makers, for example, suggest that the approach to the balance to be struck between licensor and licensee may be changing in a way which differs from that seen in Europe (compare and contrast, for example, Assistant AG Delrahim’s rejection of the role of antitrust in FRAND violations which appears likely to favour licensors, evident desire for balance between licensor and licensee interests in most of the European Commission’s recent statements.

Nevertheless, for those with an interest in FRAND issues, the JPO Guide is well worth reading for an overview of the key considerations for parties engaged in SEP licensing negotiations. The JPO has stated that it aims to keep the Guide updated regularly, with contributions from experts from around the world.